Fabulous things to do in London this autumn

Are you visiting London this autumn? Or a local looking for the best that your city has to offer over this fabulously festive season? Well, luckily for you, I’ve handpicked the best of everything the UK capital has to offer over the next couple of months. From Judy Garland to Travis Alabanza, there are so many fabulous things to do this autumn in London.

So, when does autumn (or fall) start this year? Most people in the UK go by the astronomical seasons, which change slightly every year. This surprised me when I first moved to London as I was used to the very structured meteorological seasons that set summer in the Northern Hemisphere as 1st September – 30th November every year. However, having lived now lived here for over a decade, the astronomical seasons make more sense and this year the summer season in London will run from Monday 23 September to Sunday 22 December 2019 (wrapping up just before Christmas).

This is probably my favourite time of the year to be in London – it’s so wonderfully atmospheric and festive as everyone prepares to celebrate the season and hunker down for winter. Between the fireworks, Halloween parties and endless Christmas celebrations, autumn whizzes by in a flurry of bubbly and sparkly things. Some of the best parties of the year happen during this season and, with summer finally out of the way, the city re-embraces what it does best with an amazing line-up of performance festivals and exhibitions. So pull your cosiest jumpers out of the back of your wardrobe and make the most of the season with these fabulous things to do this autumn in London.

💃 Fabulous things to do in London this October

🎩 Fabulous things to do in London this November

👯 Fabulous things to do in London this December

🎅 Fabulous Christmassy things to do in London

Fabulous things to do in London this October

Crystal Rasmussen Presents the Bible 2 (Plus a Cure for Shame, Violence, Betrayal and Athlete’s Foot) Live!

If you’ve read Crystal Rasmussen’s incredible book, Diary of a Drag Queen, then you’ll understand why this is my hot tip for this autumn. I saw their show at Edinburgh Fringe and it was honestly the best thing about my entire trip. Phenomenally talented with my favourite mix of witty+self-deprecating humour, I have such a drag crush on Crystal and you should rush to see this show.

As the sunshine disappears for yet another year, you can snuggle down and become a cinephile at London’s biggest film festival. It’s exciting to note that 60% of the 225 films in the line-up are directed (or co-directed) by women, including Céline Sciamma’s Cannes Queer Palme winner Portrait of a Lady on Fire. Other queer highlights include Two of Us, Lingua Franca, Moffie, End of the Century, Walking With Shadows, and Xavier Dolan’s latest film, Matthias & Maxime.

Oh yes, UK Drag Race blah blah blah. Another viewing party hosted by a drag queen… yawn. Yet, this is not any old queen, this is Crystal (the artists formerly known as Crystal Beth), one of the actual Drag Race contestants, who’s hosting her own screening party on Wednesdays at the BGWMC (home to her legendary club night, Mariah & Friendz). If you can be bothered to attend one screening party, this is it.

Into the Night: Cabarets & Clubs in Modern Art

The Barbican has been doing some really interesting exhibitions recently (Lee Krasner, Modern Couples) so this is definitely the one I most want to see this autumn. The preview images include some incredible shots of cabaret sets, spaces and costumes from a century ago. Plus, I imagine they will be running some interesting events to tie in with this theme over the next couple of months, so watch this space.

ShayShay premiered their Judy Garland show to rave reviews during the summer, with one friend describing it as one of the most accomplished acts around. So this is a rare and wonderful second-chance to catch it, with a special guest performance by Margo Marshall as Liza.

for all the women who thought they were Mad

Written by the incredible Zawe Ashton (aka Vod from the TV series Fresh Meat), this play explores the intersecting range of pressures that are placed upon women of colour today. This play is produced by the team behind Hackney Showroom but is actually being performed at the gorgeously Art Deco town hall in Stoke Newington.

An Evening with Armistead Maupin

Whether you’re a fan of the original 90s TV show (like me) or the new Netflix series (also fab), you’ll love this talk with the creator of Tales In The City. His books were originally published in 1978, capturing the energy and freedom of San Franciso in the pre-AIDS era, and Maupin’s stories spoke to the generations that followed about a world that is hard to imagine now. Fun fact: he also was a lead reporter about the Zodiac Killer for the San Francisco Chronicle in the late 70s and is referenced in the film Zodiac (hullo, yes, nerd alert).

Of course, if I’m going to recommend one Halloween party this October, it’s the one I’m performing at. Yes, I’m joining the team behind East London’s best queer pub, The Glory, for their first-ever Halloween ball! The line-up is incredible, with a whole load of Lipsync1000 and Man-Up alumni doing shows alongside Rhys Pieces, Sèayoné and those Gay Bingo babes Jonny Woo, John Sizzle and Ma Butcher.

Shotgun Carousel, the fab female-led production company behind last year’s Vaults Show, Divine Proportions, are back with another immersive theatre and cabaret experience. Think sit-down feast with darkly decadent performances from (if last year’s cast is anything to go by) some pretty sexy performers. This year’s theme is a Gothic masquerade ball – perfect for the Halloween season, and beyond. In fact, this show runs through till mid-January. Shame they’re not having a ‘clothing optional’ night again this year. Now THAT was fun.

Fabulous things to do in London this November

Dust off your top hat and tap shoes as the BFI are bringing you the most incredible line-up of musicals to ever grace the big screen. To basically sum up the programme, which runs from late October till January, they are showing bloody everything. So if, like me, you love film adaptations of musicals (aside from that new version of Cats – we can all agree that looks rubbish) then this is the autumnal treat you need in your life. Everything from Cabaret to Jesus Christ Superstar via Hedwig is being shown. So if you want to find me for the next few months, I’ll be at the BFI Southbank.

I was so lucky to see the first-ever performance of this show by the incredible Travis Alabanza last autumn – and I have not stopped talking about it since. If you’re a cis person (like me) and have had little happen to challenge your privilege, then you need to go and see this wake-up call of a show. Plus, you will never ever see a burger the same way again. Stopping by the Southbank Centre for a limited run – so get your tickets now.

Probably the most unlikely name for a Christmas panto you’ll ever hear – but hey, this is Sink The Pink! Straight from their solo show at this year’s Edinburgh Fringe, Ginger Johnson is back with a new seasonal show for all your work Christmas party needs (well, depending on what your workmates are like). Expect it to be a bit weird, very camp and vaguely festive. Plus, the cast includes the legendary Lavinia Co-op, who really should be made a Dame for her services to drag in next year’s honours list. Sort it out, Lizzy.

Fabulous things to do in London this December

BenDeLaCreme and Jinkx Monsoon: All I Want for Christmas is Attention

And now for your truly Christmassy treat. These two former Drag Race contestants (the season five winner and the should-have-been All-Stars season three winner) are in town for one night only with a mega show at the Forum in Kentish Town. Tickets have only just gone on sale but it’s practically sold out, so if you’re a fan of one or both of these performers, then get cracking to nab your seat.

Just May Does A Not So Silent Night

If that’s not enough camp Christmas for you, then get a load of this karaoke panto. Every Monday, Tuesday and Wednesday night in December, Just May (the world’s premier Geri Halliwell impersonator) will be hosting this ‘interactive drag karaoke show’. If you can’t get enough of Christmas songs at this time of the year, then come and feast your ears (and vocal cords) on this epic event. Tickets start from only £8, which is, quite frankly, a bargain at this time of year.

Former girlfriends Mary Higgins and Ell Potter are back at the Soho Theatre with their new show about what makes men (and masculine-presenting people) hard. It’s a surprising love letter to masculinity, featuring interviews with participants aged 8-82. If you have zero interest in pantos and Christmas cheer this December, then this is probably the show for you.

Rufus & Martha Wainwright’s A Not So Silent Night

I should probably give this listing a warning: there are very few tickets left for this event and some of the ones that are still free cost crazy amounts like £695. Normally, you would expect that at such a price you would get a lap dance from Rufus Wainwright with it. But it’s very important to note the tickets are so expensive because this is a fundraiser event for Rufus and Martha’s mother’s cancer charity, the Kate McGarrigle Fund. So, if you love the Wainwright siblings (who doesn’t) and can afford a month’s rent for a night out, then you really won’t want to miss this.

Fabulous Christmas things to do in London this autumn

Fabulous exhibitions in London this autumn

Fabulous musicals in London this autumn 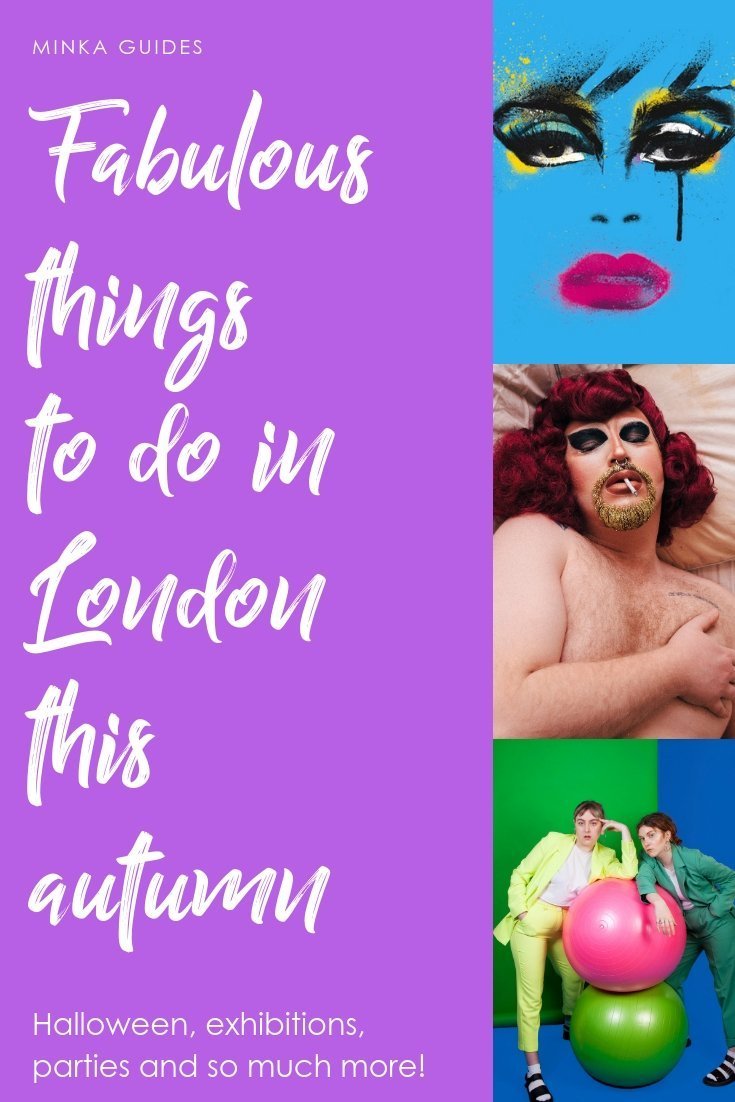 To quote the iconic @gloriasteinem, "This is what

You all know I have been LIVING in these dungarees

Which ones have you read? 🤓 My favourite part

📢 Calling all ethically non-monogamous folks in

It took me nearly 40 years to understand this self