I am still SO TIRED! I cannot believe how broken I am after Glastonbury Festival. It was a weekend of emotional extremes – I swung between desperately wanting to go home and be as far away from the mud as possible to feeling like I had never been happier! What a wondrous, bizarre experience Glasto is. It really is so strange: you just have to experience it for yourself! So before exhaustion wipes my memory completely, here are my 10 best moments of Glastonbury 2016, counted backwards from the end. 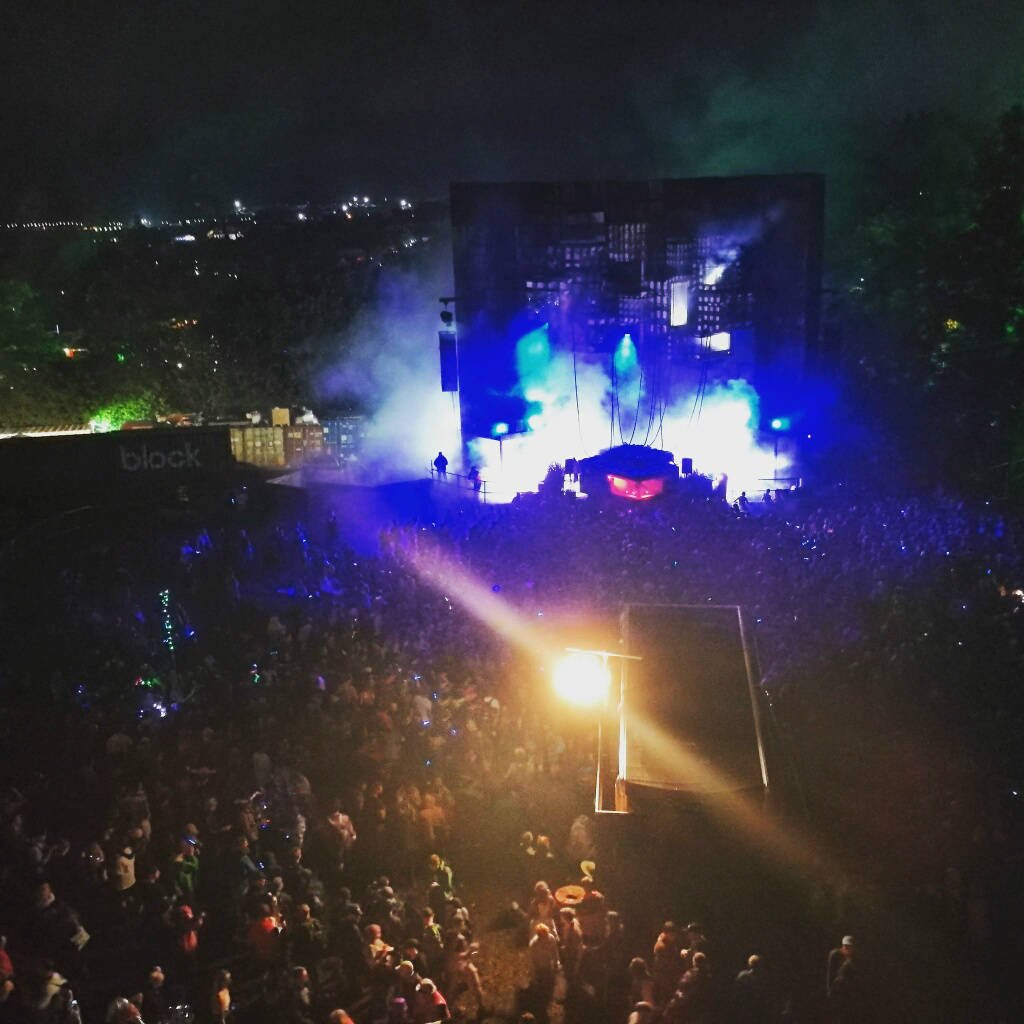 As a Sink The Pink performer, I had heard LOADS about Block 9 (mainly NYC Downlow, which many describe as their spiritual home). I visited here on Friday night and thought it was great but Sunday night blew me away! Being the last night of the festival, so many people wanted to be in this late night quarter – so much so that when we arrived at the gates for the South East corner at 1am they were closed. The area was over capacity and they were assuring us that no one would get in for the rest of the night. Thankfully, after about 20 minutes they did let more people in and we swam through the sea of bodies up to Block 9. Not only were all the club spaces (Genosys, NYC Downlow and London Underground) packed but the outside area was surging with revellers. The music was amazing, the light show was incredible and there was such energy to the area. No matter how exhausted we all were from the lack of sleep and the endless walking through deep mud, everyone was smiling and dancing; so alive with the vibrancy of the night. It was the perfect end to an intense couple of days.

There were so many highlights at the festival, but this was IT for me. Whenever anyone asked in advance what I really wanted to see, Cyndi Lauper was always my first response. It was a blessing she was on at the same time as all the major Sunday night headline acts (Cold Play, LCD Soundsystem and Earth Wind & Fire) as it meant the gig was far more intimate than anything I had experienced all weekend. The Acoustic Stage is really beautiful, all red velvet with no big screens and you can really get up close to the stage. At 63, Cyndi still sounds and looks so iconically like herself. There is such power in this woman and I was left clutching my heart as it swelled in admiration throughout her show. She played a couple of songs from her new country album but then played ALLLLLL the hits. Everything you wanted to hear, she did it – even her cover of Roy Orbison’s I Drove All Night. I captured a small part of the most incredible part in the video above. Closing her set, Cyndi made an impassioned speech about the importance of LGBT Pride (as it was also being celebrated that weekend) and then sang True Colors acapella. It was so moving I was left in tears – and as the lights came up I realised everyone around me was equally in need of consolation. It was powerful stuff. Thank you, Cyndi! 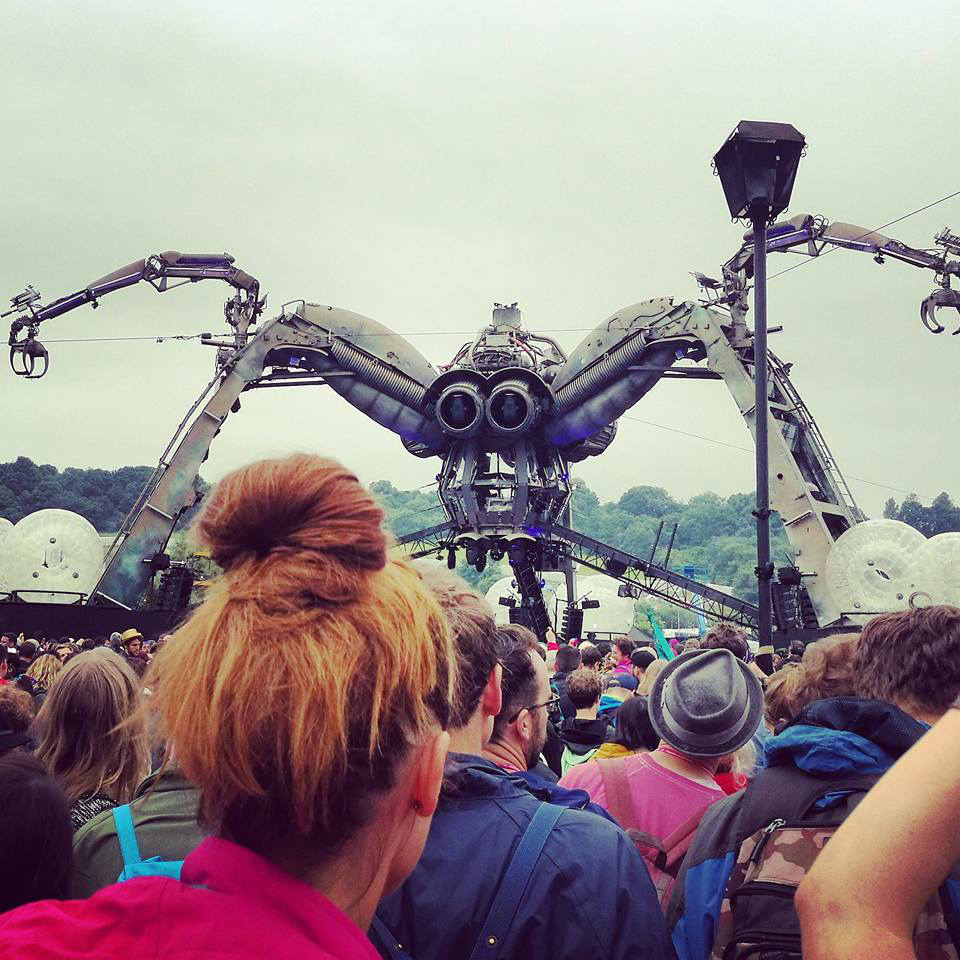 I can’t believe that Craig Charles played extended sets on pretty much every day of the festival and I only managed to catch this one. I am a HUGE fan of his BBC 6 Music radio show as it has the best vibes for getting ready to go out on a Saturday night and he didn’t fail to bring amazing vibes to our Sunday afternoon! It was supposed to hammer with rain at that time, but he kept most of the rain away with his funkadelic mixes that had me jumping up and down in the mud. It was even more amazing that he was DJing from inside Arcadia’s HUGE metallic spider that spurts fire and smoke. Such a fantastic moment!

Sunday afternoon: Years & Years on the Other Stage

I only caught the end of this gig but what an ending! Adorable Olly Alexander was wearing this incredible Pride Parrott sportswear outfit – hello I want it! – which made him so hard not to watch! Just before playing their huge hit King to close the set, Olly made an impassioned speech about Pride, starting with “Most of you know I’m gay. In fact, I’m really, really gay!” He then talked about how fear dominates the lives of so many queer people and asked the whole audience to join him in shouting ’By, fear, bye!” The stage then exploded with SO MUCH glitter in the Pride flag colours, which dropped over the front section of the audience. The whole thing was a delicious visual delight!

Poor John Grant – he really wasn’t well and kept apologising for his inability to hit all the notes but it was still a magical gig for me. In fact, his illness probably matched the overwhelming sense of exhaustion that most revellers felt by Sunday. The most beautiful part of this gig was how many men were holding each other as John’s deep voice washed over them. His music has a huge effect on men of all sexualities and they were left vibrating with the intensity of atmospheric and emotional ballads. Beautiful.

I didn’t really see much on Saturday. I was too busy trying to get myself clean at the Greenpeace showers, so once was cleansed and ready to get muddy all over again I headed for the Pyramid Stage. I wasn’t interested in seeing many of the headliners – I prefer smaller gigs – and I hadn’t given Adele much thought but once Saturday evening came around I made a beeline here. As did basically everyone else at the festival. The scale of the crowd was INSANE! We tried to enter the arena 5 minutes before it started and we managed to have one of our gang torn away from us as we were literally pulled in different directions by the number of people surging to find a place. In the end, we head right up to the back to the top of the hill to watch Adele perform and in fact, it really added to the experience. Being able to see the effect the show had on the thousands of people singing along was incredible! And yes, the songs were amazing and she sang most of the hits (because every song is right?) but for me, it was Adele herself that was the most entertaining element. She was obviously SO EXCITED to be there and was a little overwhelmed, which was so endearing. She dashed around the stage in giddy excitement, chatting and swearing, pulling people up from the audience and having a bit of banter with everyone in the front row. My favourite moments was when she told someone off for having a wee in a cup and also when she told some man that they looked like a member of East 17. I have a very nasal Australian accent so I loved hearing her chatting away. It made me swoon in an unexpected way!

Friday night: Disclosure on the Other Stage

I only went to go see Disclosure because all my friends went. I’d sat on a hill looking over Bestival in 2014 and listened to their show at a distance but I totally unaware of how great their staging is. It was by far the best set and visuals at Glastonbury from what I saw! They both had these Star Trek-style command stations to play from and navigated around the absence of the guest vocalists by having their faces animated over the graphics for their songs. I was so mesmerised by their show that my friends kept having to remind me to dance! Plus, they both seem like such nice boys. I definitely won’t miss the chance to see them at a festival again!

The last time I saw Ezra Furman and his band The Boyfriends play had been at a Rough Trade New York with about 20 other people in attendance. It was daytime but completely dark inside, which was weird but still amazing. This time, I was out in the sunshine surrounded by at least a thousand other people who were singing along joyously to the 50s-infused tunes. It was hard not to feel filled up with a love of life, even when Ezra explained that one of his songs was about a time when he felt suicidal. Sounds pretty heavy but it was actually quite beautiful. I really love the squeaky (for want of a much better word) Gordon Gano-style Ezra’s vocals have but having seen him perform a few times, there was definitely something a bit off with the sound this time. It didn’t translate quite so well for me this time. But, hey, it’s a small complaint when you get to see one of your fave bands in the sunshine.

Friday afternoon: Christine and the Queens on the Other Stage

This was another accidental gig for me. I knew nothing about Christine – not a single song – and only one of my friends had heard of her. But as we trekked through the rain to find shelter in a nearby bar, we stopped transfixed. I’ve rarely seen a performer be able to talk to such a huge crowd like it is a small intimate one. Visually, no one on stage was wearing anything that interesting but you couldn’t take your eyes off this bonkers performer. She did a whole section where she talked about how each flower in a bunch represented different famous female pop stars – like Beyonce and Rihanna – and accompanied this with excerpts from their songs. She’s bonkers, her music is great and I would love to see her again!

Friday morning: James on the Other Stage

So after only 4 hours sleep the night before (my average for the festival – no wonder I am still so shattered a week later) I trekked over to the Other Stage to watch Michael Eavis cut the ribbon and James open the festival. It was raining, as it had been for most of the week beforehand, so the organisers were rushing to pile loads of woodchip over the section in front of the stage. This meant the opening was delayed by 45 minutes whilst we waited behind temporary fences. It was pretty bleak, to be honest, and I was ready to head back to my camp when everything finally kicked off. Not a great start but I am so glad I hung around because I’d never seen James live and was fascinated by the way singer Tim Booth danced around. It was definitely in the same league as Peter Garret from Midnight Oil for me, and with the two of their hairless heads, they would make an incredible sight together. They opened with their new single Nothing But Love, which is definitely one of my faves for this year, so after such a dreary and delayed start things definitely started to look up and welcomed what was an insane weekend for me. 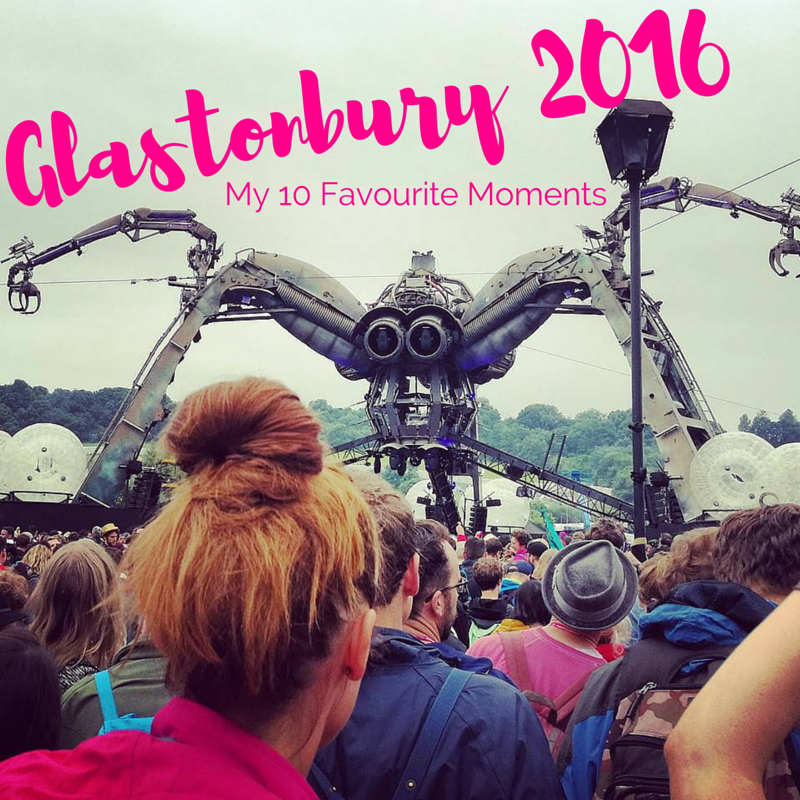