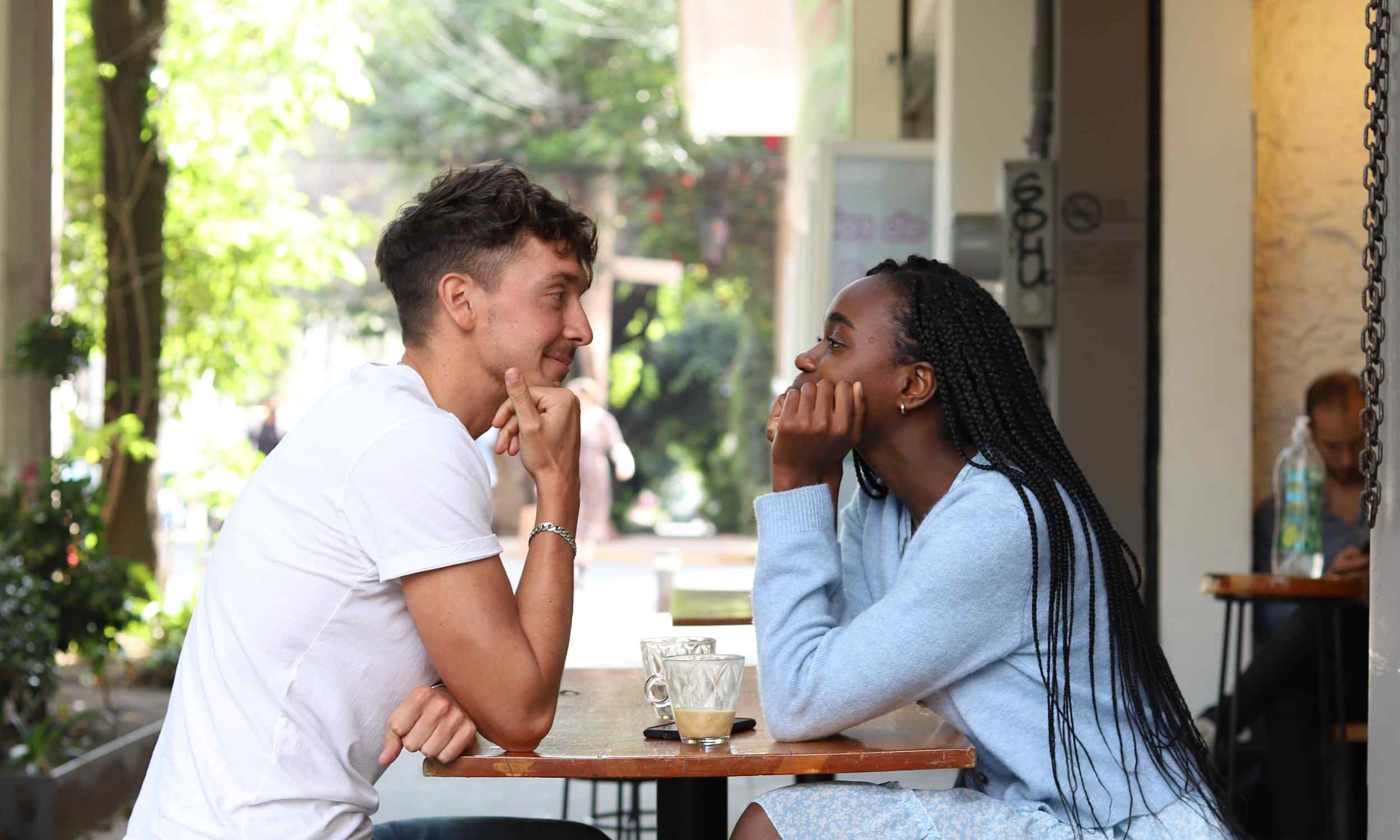 Dating apps suck. That seems to be the general message these days. With Tinder reaching its 10th birthday next month, you may have noticed a surge in articles of late bemoaning how a decade of swiping has left single folks feeling pretty hopeless about finding love. For many, it seems that dating apps don’t work.

As digital platforms for dating culture, these apps can and often do amplify the worst aspects of our society (especially misogyny and racism) as we make split-second assessments of our attraction to a stranger. Personally, I sometimes find this process of rejecting an endless stream of people an unnecessarily negative experience. But most of the time, it feels like a means to an end – similar to flicking through a magazine until I find something I want to read.

You see, despite their sizeable issues, I’m pretty pro-dating apps. They have helped me locate what I struggled to find pre-Tinder: people I want to date. In the noughties, I kept my aspirations pretty low. I dated wildly unsuitable people and thought that if I tried to define my type or expectations, I was setting myself up for inevitable failure.

These days, dating is a whole different ballgame. Now I can be selective and hold out for people who genuinely tick most of my boxes (confident non-monogamous queers with dark wavy hair in their late 30s/early 40s, I’m talking about you). I can use dating apps specifically designed for folks like me and filter my search criteria even further. This capability still blows my mind in a way that people who began dating after London Olympics will probably never understand.

Yet, my low-key enthusiasm doesn’t align with a growing consensus that dating apps are a waste of time. Among my friends, this attitude seems to depend on whether you are monogamous or not. Overall, my polyam friends seem to enjoy dating apps (if they feel they need to use them). However, my friends searching for an exclusive relationship are generally pretty disappointed.

This difference has led me to wonder: are dating apps even designed for monogamy? Finding love, especially if you are looking for ‘the one’ – or at least a new one – is always a long shot. Yet, I’m starting to think that with online dating, that’s an even longer shot.

Before apps changed the dating landscape, matchmaking websites were seen as decidedly unromantic. The process of finding true love wasn’t something you were supposed to coldly coordinate but were supposed to let happen ‘magically’ on its own. This serendipitous approach is an interesting contrast in attitude compared to young Millennials and older Gen Z folks who now assume they will meet their partner/s online.

Two of the biggest gripes that people have about dating apps these days are the overwhelming abundance of choice and, as a result, the feeling of swiping fatigue. The multitude of options has made it difficult for people to determine if they should invest in an exclusive relationship when someone else who is also great could be another swipe away.

I think there is a magnification of scope at fault here too. It used to be that if you were cis, straight and grew up in a small town, you would probably marry your high school sweetheart or risk being ‘left on the shelf.’ Your options were pretty minimal, so you worked with what you had. However, these days, we don’t need to be reminded that “there are plenty more fish in the sea” because now we can essentially view the whole ocean.

These days, we don’t need to be reminded that “there are plenty more fish in the sea” because now we can essentially view the whole ocean.

Dating apps have enhanced our understanding of how many people are out there. Could they be responsible for the sudden rise in openly non-monogamous folks over the past decade? Has our awareness of choice meant that we no longer feel obliged to be limited? Online dating must have influenced this because it’s become much more socially acceptable to fall in love but choose to keep exploring.

In one sense, it probably shouldn’t be surprising that dating apps don’t always work for monogamous folks. After all, Tinder was only created a decade ago because Grindr (launched in 2009) existed – an app that embodies cis gay non-monogamy. It’s fair to say that Tinder took more than a bit of inspiration from its predecessor, including their rhymable names.

As Moira Weigel points out in her 2016 Guardian article, Why isn’t there a Grindr for straight people? this wasn’t the first time straight dating culture had attempted to copy the queers. Apparently, TGI Fridays were initially created as a hetero singles bar after the founder witnessed how gay men connected at West Village bars in 1960s New York.

The chain then went on to become “the least sexy place on earth,” as Weigel points out. Meanwhile, many in the queer community now hold the rise of Grindr responsible for the diminishing number of gay bars, as queer men no longer need them to meet each other.

Was Tinder (and all the apps that have followed) an attempt to shoehorn the highly profitable search for monogamous love into a format that has actually achieved the opposite? To be clear, plenty of people have found monogamous partners through dating apps.

However, you could argue that they have found monogamous love despite the apps not being designed for it. In our mononormative world, when you can (in theory) find a cis straight monogamous partner pretty much anywhere, it’s not surprising that some folks have struck gold online.

The issue is that after a decade of swiping, many people haven’t. On her podcast, A Single Serving, author Shani Silver has documented her frustration with how endlessly unfilling online dating has been in her quest for love. She now encourages her followers to delete all dating apps, like she has, and focus instead on looking for romantic connections IRL.

So, are there any monogamous people who genuinely benefit from dating apps? It’s perhaps worth considering the economics of love and romance, as the entrepreneur, writer and all-around lovely guy Mo Gawdat put it on the Diary of a CEO podcast (Episode 144).

Essentially, the more ‘requirements’ we have, the more it narrows down the number of people that are of potential interest to you. If you have a lot of criteria, you could go from looking for one in 10,000 to searching for one in 100,000.

The economics, if you’re straight and monogamous with pretty broad taste, means you’ll probably be overwhelmed by the number of potential options online. Or, as writer and podcaster Emma-Louise Boynton describes it, “the burden of optionality with dating apps.” At one of her Sex Talks events, Emma described her quest to find an exclusive relationship with a man on dating apps as a mission that required her to fabricate reasons to reject people.

“I needed some criteria to swipe because there are just endless (options). So, I’m like, “I don’t like the colour of your hat. Those shorts are suspect. I can’t believe you spelt that word wrong.” Things that I just honestly do not care about in real life, but you have to have some filtering system. Even then, you end up with 150 people, and you’re like, “I can’t. This is totally unmanageable.”

Challenging my need for male validation by owning my desire

I needed some criteria to swipe because there are just endless (options). Things that I just honestly do not care about in real life. Even then, you end up with 150 people, and you’re like, “This is totally unmanageable.”

According to Gawdat’s economic assessment of dating, Boynton’s numbers are, in theory, pretty good. Her abundance of choice reflects the fact that vast swathes of the population could potentially be a partner. But what about people who want an exclusive relationship but don’t have great economics?

For some people in the queer community, their numbers aren’t nearly as plentiful. An example of this could be someone who trans4trans. In our intensely cisnormative society, meeting a fellow trans person that you may want to date isn’t always as easy as connecting with someone at work, on the train, or literally the person next door. That’s not to say it can’t happen but far less likely.

Under such circumstances, dating apps can become a very viable option. Connecting with people from your specific community when they may be harder to find in your everyday life makes online dating a fantastic tool. Your numbers may still be small, but as we’ve seen above, perhaps that isn’t so bad. So, when it comes to monogamy intersecting with particular criteria, dating apps can suddenly become a help instead of a hindrance for finding exclusive connections.

As for us non-monogamous folks, too many options aren’t so bad – as long as you understand your limitations. Terms like ‘polysaturation’ reflect the fact that polyamorous folks can sometimes find themselves having too many partners.

With dating apps making it incredibly easy to find people with similar connection/relationship styles, it’s no wonder non-monogamy has boomed in recent years. I’ve started to see people on pretty mainstream dating apps like Bumble and Hinge advertise overtly that they are looking for someone monogamous simply because of the growing number who aren’t.

So, what would a dating app that did work for monogamy look like? Quite possibly a space where you could only connect with one person at a time. It would slow down your matching speed, preventing you from swiping on anyone else and giving you time to consider if an individual connection had value. That way, you could only keep looking if you decided that person wasn’t for you.

Personally, this kind of app wouldn’t be for a polyamorous person like me. But I love love and want people to find relationships that work for them. So, maybe it’s time to rethink the dating app space for monogamous folks? Feel free to leave all the swiping to the rest of us.