Originally from South-West London, my lovely friend Kate has lived in Brighton for many years now so she really knows it inside out. When she isn’t DJing at iconic nights like Traumfrau or modelling for life drawing classes with Artists, Models, iNK, she is making her own art. So if you’re looking for a hipster guide to Brighton, then you should check out my full city guide, including Kate’s tips, here. 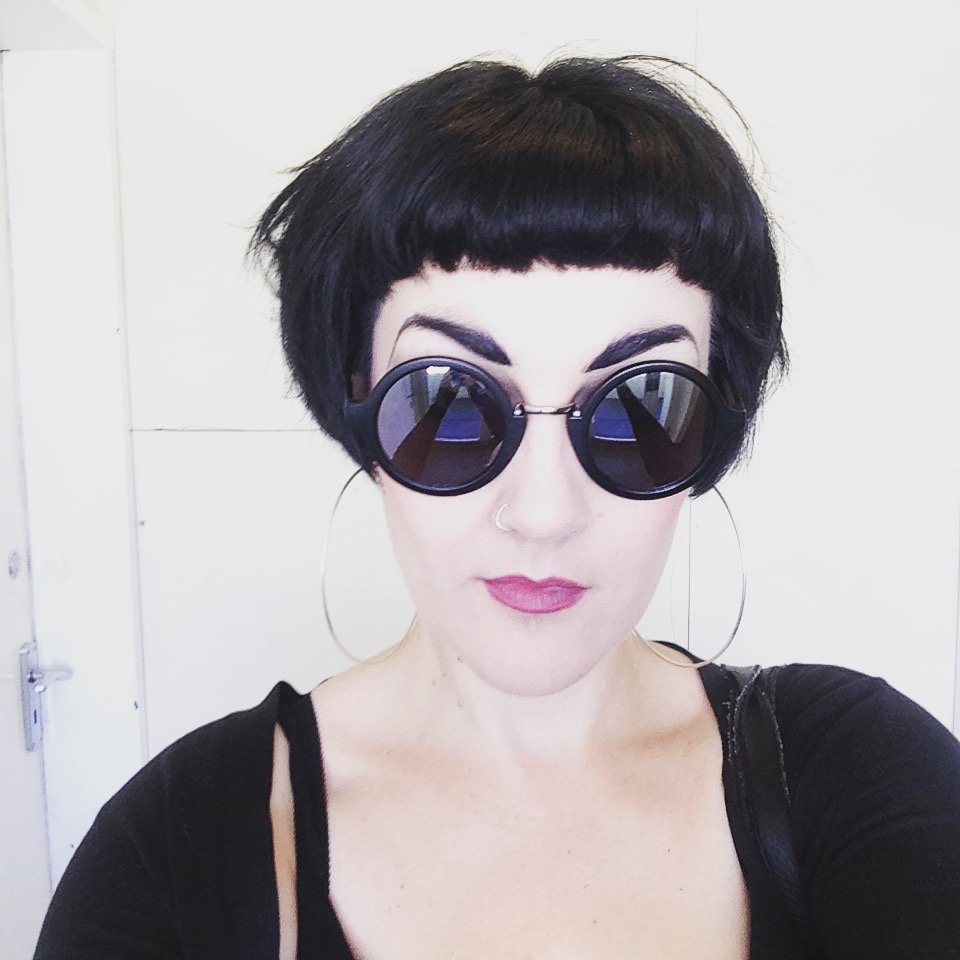 I love Brighton. It gets a lot of crap in the press, as it can sometimes seem like a bit of a parody of itself. ‘Oh that’s SOOO Brighton’, people will say, when faced with its many eccentricities. But really, I can’t imagine living anywhere else right now.

Like a lot of creative people living in Brighton, I live pretty much hand to mouth, and despite Brighton becoming an increasingly expensive place to live, it’s still possible to have a pleasant life here.

A lot of that is due to my friends, and my community, and here are a couple of places which are like second homes for me:

1. The Marlborough Pub & Theatre: We are incredibly lucky to have The Marly here in Brighton. It’s a friendly, LGBTQ space that is home to Pink Fringe: a queer theatre upstairs, run by Tarik and David, and they work tirelessly to bring us some of the most radical, inspiring and cutting-edge queer performance art and theatre. For some reason they let me DJ there once a month, the bar staff are all crush-inducingly beautiful, the pool table is free and the toilets are genderless! When you go there, why not drop some cash in the donation box to make sure they stay open?

2. Sussex County Arts Club: I’m very involved in the art scene of Brighton, specifically the life drawing scene (yeah, there’s a scene for almost everything here!). I have worked pretty extensively as a life model, as well as a class facilitator, predominantly at a fairly hidden non-profit art studio called Sussex County Arts Club, where I have modelled and run drop-in life drawing sessions for around 4 years. It’s been running since the 1940s, and anyone can come along to their daily sessions to paint, draw and sculpt. All sorts of people go there- professional artists and illustrators, to keep up their drawing skills, as well as to socialise with other artists. Students come to add to their portfolios, and some people come just because they enjoy the relaxing benefits of sitting and drawing for a couple of hours.

I’m a tea and chai latte drinker, Brighton is literally FULL of cafes, and I tend to group them into 2 categories: quiet places to get on with some work outside of the house, and places to meet friends for catch ups.

The first category, I would recommend Redwood Café on Trafalgar Street, the Mad Hatters on Western Road and Presuming Ed on London Road.

For the second category, I’d probably go for the Marwood, which is pretty bustling and sociable, and the Redwood Cafe too.

The Blackbird Tea Room and the Mock Turtle are also lovely if you like a traditional and twee cup of tea with a nice bit of cake.

I also lovelovelove Cafe La Vida on London Road, where you can get a freshly made baguette and a tea/coffee for only a few quid.

Great places for food in Brighton

As I mentioned, I live pretty close to the breadline, so I don’t eat out much! Also, I’m probably one of the few people in Brighton who isn’t a massive foodie, or vegan/vegetarian, but since moving here, even my diet has improved massively- we are spoilt by great places to eat! We have a lot of chains here now that you find in most cities, but thankfully they’re matched in numbers by more independent healthy establishments:

Archipelagos: This is a really lovely Greek restaurant that is quite the treat, if you’re into Greek food (I am!). And BYOB too, last time I was there.

Pom Poko: These guys are just opposite the Brighton Dome and if you’re a bit strapped for cash and love Japanese food, this is for you. It gets very busy at weekends and is popular with students, so you may need to queue a bit for a table or for takeaway, but the staff are mega-fast. It’s also BYOB if you sit in.

We Love Falafel: The best place for falafel. On Sydney Street.

Iydea: There are two Iydeas in Brighton, one on Western Road and one in the Laines. They do really, really great takeaway and eat-in veggie and vegan food.

The Cowley Club: The Cowley is a socialist hub that gets a bit of a bad rep at times, but they do pretty amazing and cheap vegan/veggie food (including a Sunday Roast) that is cooked by volunteers who live and work in the club.

The Bedford Tavern: This is my local award-winning pub, and it’s a traditional-style, friendly local pub with a mostly LGBT clientele. I go here most Sundays (at 12.30 sharp!) where you can get, in my opinion, the best roast in Brighton for £10 (which includes a glass of wine!) Every Easter, they run the incredibly popular Easter Bonnet Parade and the DRAG RACE. Which is literally a school sports day-style race…but with drag queens. You can turn up, place bets on your favourites, and all of the money raised goes to local LGBTQ charities.

Boho Gelato: Boho Gelato is an Italian ice cream parlour run by a fabulous guy named Seth, who makes such delicious (and sometimes weird!) ice creams and sorbets, that I frequently fantasise about having kinky ice-cream-covered sex with him. They’re based in Pool Valley, near the coach station.

Pizza Face pizza: If you’re too lazy/hungover to go out for food or cook, then you can do worse than Pizza Face. Gorgeous handmade pizzas and they cater for most dietary needs too- Vegan, veggie, Dairy and Gluten free.

Like a lot of people in Brighton, I do love a drink. There’s a running joke here that there’s a pub for every 5 people who live here, and that’s kinda true.

Of course, my favourite pubs are The Marlborough and the Bedford Tavern, for the reasons listed above. The Saint James Tavern on St James Street and the Mucky Duck are also pretty cool.

If you wanna meet somewhere a bit dark and sexy for a date or a hook-up, I’d recommend the Bees Mouth on Western Road, which has a cool New Orleans vibe about it.

I love a good cocktail, and if you’re a fan of a martini, you can’t go wrong with Bohemia, Valentinos or MyHotel (MyHotel is a bit mainstream at times, but the bar staff really know their shit.) If you like drinking, and musical theatre, I also recommend Bar Broadway for a bit more of a raucous evening!

Traumfrau! What started as a club night for ‘queer girls and their friends’ has evolved into one of the loveliest and most fun queer nights in town, IMHO!

Spellbound @ Komedia ‘The 80s night for people who hate 80s nights’ is run by Jenna & Simon, and they play new wave, electro and alt 80s classics once a month.

Powder Room @ Revenge: There’s a fab alt-drag scene that’s been emerging for some time now, the reigning queens being the House of Grand Parade. They host a night here once a month, and it will usually be headlined by a RuPaul’s Drag Race Star. These nights can sell out fast, depending on their special guest!

FOMO at Revenge: Thursday nights at Revenge is definitely a guilty pleasure. Cheap drinks, and all the music you say you don’t like until it comes on and you decide it’s the best thing EVER. I’m probably too old for Revenge. But usually, by the time I end up there, I don’t really care anymore.

Non-club nights out in Brighton

There are loads of interesting nights out in Brighton that isn’t based on dancing and drinking! OMG!

Catalyst Club: Run by Dr David Bramwell (he’s not a real doctor) this is a night of talks by ordinary people who are interested in things and want to share their interests in things with an audience. Always a great night! (David Bramwell also wrote a Brighton very popular alternative guidebook called ‘The Cheeky Guide to Brighton’ which I would absolutely recommend).

Things to do in town during the day

Brighton has a diverse and rich history, so if you’re into that sort of thing, do check out the museums:

The Booth Museum on Dyke Road has a HUGE collection of Taxidermy, so if you like dead things, that’s worth a look.

Brighton Museum, by the Pavilion, is actually a wonderful little museum, with some great exhibits. The Pavilion itself is glorious and really worth checking out, especially if you enjoy hearing the ludicrous stories of decadence about the Prince Regent (nicknamed ‘The Prince of Whales’ by his frenemy, the infamous Dandy, Beau Brummel.) The dining room and kitchen are the very definition of decadence. Queen Victoria allegedly hated the Prince Regent, and his many indulgences, so when she got the crown, the first thing she did was give the Pavilion to us, the people of Brighton. You can get discounted entry if you live in Brighton, so take a local friend with proof of address if you can!

Saturday daytime is market day in the Lanes, so do check that out.

If you’re REALLY into markets, car boots and finding weird antiques, head to the Marina market on Sunday. (Some say it’s best to go towards the end of the day, to get stuff really cheap. But some say its best to go early, to snatch the best stuff before its sold. Some even stay out all night on Saturday and head straight there!

The Penny Arcade, by the Palace Pier, has a large collection of very old seaside amusements that I personally find very interesting.

I also recommend visiting Devil’s Dyke, which is an impressive area of natural beauty, a short drive or bus ride outside Brighton on the Sussex Downs. Good for a picnic and a lovely view of the Sussex countryside.

Check out my full city guide for Brighton, including Kate’s tips, here.