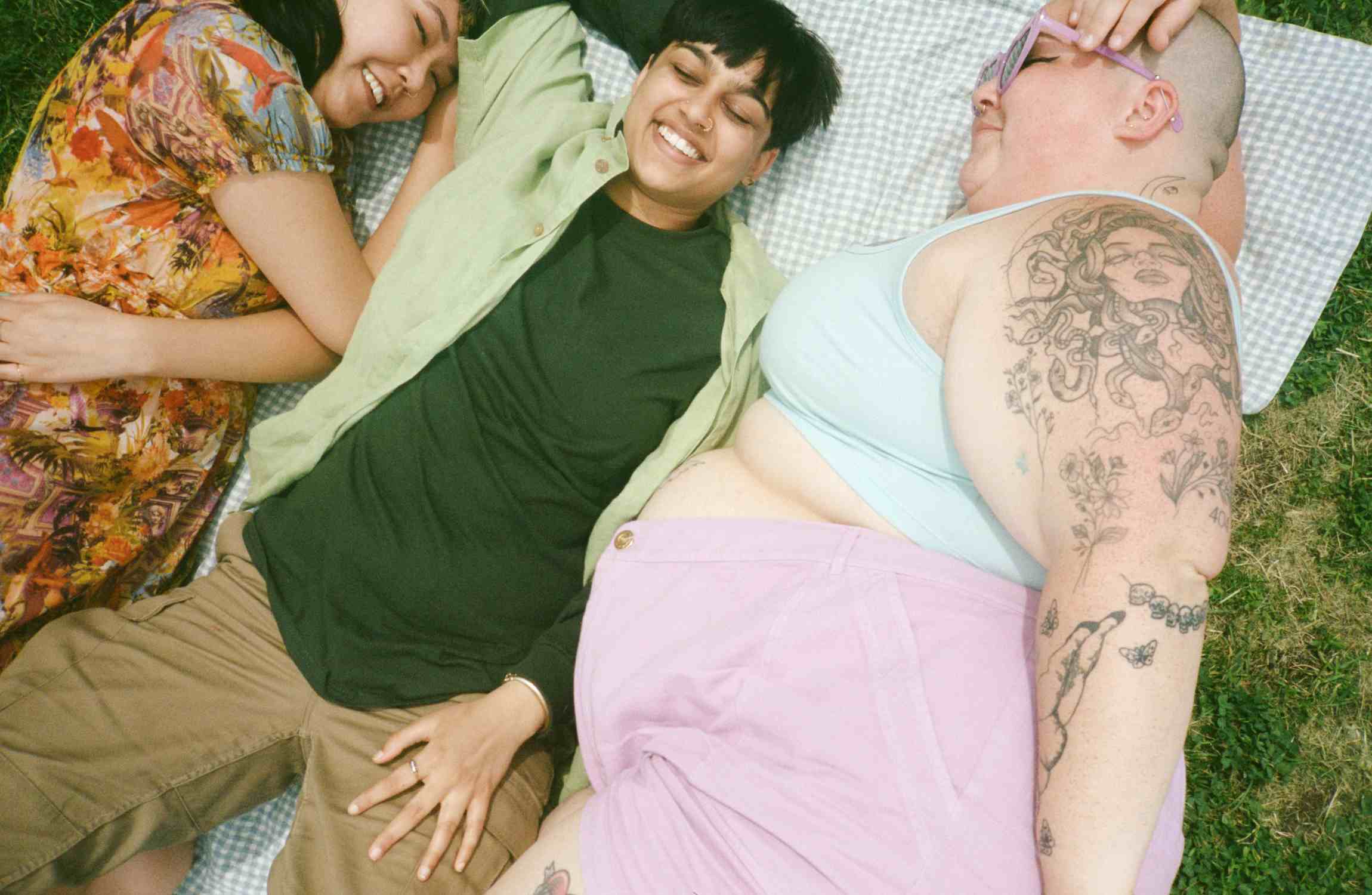 Dating apps I use for meeting polyamorous and non-monogamous folks

If there is one thing I know a lot about, it’s dating apps. Over the past three-ish years, I have spent an extraordinary amount of time on them. Not simply looking for lovers and partners but also because I find them to be fascinating. So, if you’re trying to find the best polyamorous dating apps, I can point you in the right direction.

I would argue that almost every dating app is essentially a polyamorous dating app now. I don’t think dating apps are designed for monogamy because they present you with an abundance of options that encourage you to keep looking. They’re possibly one of the reasons for the massive surge in polyamory over the past decade. These days, on pretty much every dating app, you’ll see people openly looking for non-monogamous relationships.

That’s why not all the apps listed below are specifically polyamorous dating apps. In fact, there are very few well-designed, popular apps that are specifically for non-monogamous folks. Plus, I have met polyamorous people through a wide variety of dating apps because, unfortunately, not everyone you’re looking for will be on one specific app (it would be helpful if they were, right?). That’s why I have the following apps on my phone – all eight of them – which I regularly use to meet like-minded people. So, here are my recommendations to get you started if you’re after one.

When it comes to polyamorous dating apps, Feeld is where it’s at right now. Not just in London but globally. It has been the most reliable app for finding non-monogamous people wherever I’ve travelled (and I’ve connected with most of my lovers through it).

One of the most polyamory-friendly aspects of this dating app is the ability to link your profile with a partner. Yes, only one partner, so it’s still very couple orientated and a potential point of contention when you have two or more partners. However, it is quite a handy feature when you want to date as a couple and separately. Plus, I like being able to check out someone’s other partner before I swipe right on them. You can also create group chats between people you match with and other partners. So, Feeld is openly orientated towards connections of more than two people.

No matter where you are, I would give Feeld a try first. Once you’ve swiped your way through this app, you can try some of the other options.

I first heard about #open when its co-founders were interviewed on the Multiamory podcast, and I was instantly curious about its ethos and design. Not only does this dating app require all users to sign a code of conduct (that focuses on consent, respect and inclusivity), but it’s also big on data privacy. This factor is huge as most dating apps make money by selling your data, which is pretty concerning (especially to anyone with a non-normative lifestyle).

The interesting aspect of #open’s design is its use of hashtags. Every interest, kink or preference on your profile can be listed as a searchable hashtag, making it easier to find people with similar interests to you. I also enjoy two other features of #open’s design: it loops a person’s profile photos, and you can review everyone you previously passed on. The first one is clever because you can easily swipe through someone’s photos without having to go in reverse to see them again. The second one means you never have to worry about swiping the wrong way. You can always review your left swipes, whether it’s three seconds or three years later.

#open lets you scroll through new people either in the classic one-at-a-time way or as a grid, which works for me as I sometimes like to savour the process and sometimes want to speed through it. There is also the option to have two profiles – one solo and one partnered. Again, it appears only to let you connect with one partner, which won’t work for some polyamorous folks. However, everything else about this app was designed with the user in mind.

As far as completely polyamorous dating apps go, #open is by far the best.

Bloom was another app that I discovered via a polyamory podcast. Its founder Luna Ray was interviewed on the Normalising Non-Monogamy podcast late last year, and I thought the concept behind Bloom Community was quite clever. Essentially, it mixes a dating app with an events app like Eventbrite or Meetup but is focused exclusively on the sex-positive community.

While I have the Bloom Community app on my phone, I have yet to experience what it’s like as it has only launched its events feature in some larger U.S. cities. So, while you can use the app anywhere, they currently only list events for places like San Francisco and New York. However, they have many online events listed if that’s your kind of thing.

Calling all queers who aren’t cis men: this one is for you. I love Lex (pictured above) for a whole bunch of reasons. It’s specifically for a community I’m always eager to connect with, and its format is more like the personal ads you used to find listed in the back of the newspaper. That’s right: Lex is a text-based app that I find refreshingly different and cute. So, if you’re looking for dates, community, advice or resources, you’ll usually connect with someone specific.

In London, many people advertise their non-monogamy on Lex, whether it be looking for partners or advice or advertising events. The app also has a Missed Connections feature, which allows you to write about someone you saw in public but didn’t speak to (these ads can get hilariously thirsty sometimes). Aside from polyamory, I’ve also made party friends on Lex, twice leant out my bicycle while I was travelling, advertised rooms in a queer share house and enjoyed posting saucy song lyrics from my fave tunes. I highly recommend this app if building queer community is your thing.

I have a bit of a love-hate relationship with OkCupid. On the one hand, it was the first dating app to include polyamorous people, which was pretty pioneering. In 2014, OkCupid added the option for indicating that you’re in an open relationship, and in 2016, they were the first to add linked partner profiles. So, they have been there for our community long before all the other dating apps were.

On the other hand, the app’s design does feel a little dated. It’s not simple and sexy as Feeld or Hinge. There are lots of confusing options, which means I never really know what to do first when I open the app. It also tends to show you people you have previously swiped left on when there’s no one new, so I often get frustrated about swiping through the same people over and over (and over).

So, why do I still have it on my phone? It’s still one of the more reliable polyamorous dating apps, especially when I’m travelling through countries where the above apps aren’t so popular yet. So, OkCupid is usually worth checking out, especially when you’re new to polyamory, as long as you don’t use it with high expectations.

Hinge markets itself as a dating app that’s “designed to be deleted”, which makes it sound especially monogamous, but it’s pretty much the same as all the others. Its name makes me laugh, as a hinge partner is a polyamorous term for a partner who connects two metamours, so it feels like it should be an app for us either way.

Hinge is owned by the same online dating conglomerate that owns Tinder and OkCupid, so it doesn’t do anything that different. However, I do like the clean design, the way you can scroll down through the profile and the fact that you can’t swipe left (you have to hit an X to move on to the next person). All of this does encourage you to explore a person’s profile before you keep swiping.

Challenging my need for male validation by owning my desire

Recently, Hinge added a ‘dating intentions’ section where you can indicate what you’re looking for, such as a short or long-term relationship. There’s also a box where you can expand on this, which makes it the perfect place to detail that you are polyamorous. This feature is probably in response to the number of non-monogamous people I have seen being open about their relationship status on Hinge. Despite not being a polyamorous dating app, its design seems to appeal to many of us, so it’s worth checking out.

When I first downloaded Bumble a few years ago, it wasn’t my thing. At the time, Bumble appeared to be dominated by cis-straight men looking for monogamy, which is great if that’s what you’re looking for (but I wasn’t). After a few months of uninspiring swiping, I deleted it and figured I’d never return.

Then a year ago, I made friends with a fellow queer while travelling who suggested I give it another try. Thankfully, I did, as I connected and fell in love with someone great on my travels. Since then, I’ve noticed more diversity on the app and enjoyed using the Bumble BFF to find new friends while travelling.

Bumble was founded on the idea of having an app where women are the ones to make the first move. This concept means it has attracted people who like this feminist approach to dating. However, since changing my gender identity on dating apps, I’ve been left wondering who initiates the chat if neither myself nor the person I have matched with identify as women. Either way, this app has a good vibe about it.

Ah, Tinder. My classic fallback option. To be clear, there is a lot not to like about this app, especially its approach to gender. When I recently switched my identity to genderqueer on there, it asked if it should show my profile to people who like men or people who like women. I was like, “uh, neither?” It’s so silly that they don’t have a non-binary option, at the very least, because they would probably make themselves a lot more popular.

That said, Tinder is already very popular. It dominates the dating app market globally (boasting a whopping 55 billion matches in the past decade), so I turn to this one when I’ve rinsed all the above options. You would be surprised how many non-monogamous folks are still using Tinder, perhaps because they don’t know there are other (better) options. Unfortunately, you have to be willing to do a lot of work to find them, as in a lot of swiping. Or at least, that’s how it feels to me, as I don’t like most of the people on Tinder. But it’s always worth a shot if you’re in an area where other polyamorous dating apps haven’t worked.

Of course, there are other options, some specifically for polyamorous people and some more for hookups and kink connections. Below I’ve listed apps that I’ve not tried because they don’t seem right for me or that I’ve used and then decided not to bother with.