Fabulous things to do in London this summer

Are you visiting London this summer? Or are you a local looking for the best that your city has to offer now the sun is (finally) out? Well, luckily for you, I’ve handpicked the best of everything the UK capital has to offer over the next couple of months. From Peaches’ new variety show to my Lipsync1000 grand finale performance (!!!), there are so many fabulous things to do in London this summer.

So, when does summer start this year? Most people in the UK go by the astronomical seasons, which change slightly every year. This really surprised me when I first moved to London as I was used to the very structured meteorological seasons that set summer in the Northern Hemisphere as 1st June – 31st August every year. However, having lived now lived here for over a decade, the astronomical seasons definitely make more sense and this year the summer season in London will run from Friday 21st June to Monday 23rd September 2019.

Summer in London is usually a dreamy escape from nine months of cold and rain. The sun comes out and all the green spaces around the city suddenly become filled with people lazing around in its glow. There are so many things to do during these few short months that the weeks just fly by. There is an incredible array of festivals, outdoor cinemas and parties to enjoy. So pull on your short shorts and make the most of the season with these fabulous sunny things to do in London.

💃 Fabulous things to do in London this July

🎩 Fabulous things to do in London this August

👯 Fabulous things to do in London this September

🎨 Fabulous exhibitions in London this summer

🎭 Fabulous theatre and live performance in London this summer

🌟 Fabulous musicals in London this summer

Fabulous things to do in London this July

Crystal Rasmussen Presents the Bible 2 (Plus a Cure for Shame, Violence, Betrayal and Athlete’s Foot) Live!

If you’ve read Crystal Rasmussen’s incredible book, Diary of a Drag Queen, then you will know why I am so crazy excited to see this show. If you haven’t read her book yet, then get your hands on a copy now.
📅 24-25 July 2019
📍Soho Theatre, 21 Dean St, Soho, London W1D 3NE
➡️ sohotheatre.com

If you’ve been having constant cravings for the Canadian crooner, then get your ass along to the Butch Please! party at the RVT. Style your hair into some floppy 90s fringe – or even rock a Stetson – to dress up as your favourite version of KD for this one of a kind party.
📅 25 July 2019
📍Royal Vauxhall Tavern, 372 Kennington Lane, Lambeth, London SE11 5HY
➡️ facebook.com

Fabulous things to do in London this August

As a queer kid in the 90s, I was obsessed with Mathew Bourne’s groundbreaking version of Swan Lake. Long before the days of YouTube, I had a copy of the ballet on VHS tape that was one of my most treasured possessions. So I am really excited to see his latest production, a ‘passionate reimagining’ of Romeo and Juliet.
📅 7-31 August 2019
📍Sadler’s Wells Theatre, Rosebery Ave, Clerkenwell, London EC1R 4TN
➡️ sadlerswells.com

There’s Only One Peach with the Hole in the Middle

Peaches is coming back to London with her epic ‘variety-style futuristic stage happening’ involving over 40 musicians and performers. Amazingly, the show is inspired by the 70s variety shows of legends like Bette Midler and Liza Minnelli, so this promises to be one amazing evening.
📅 28 August 2019
📍Royal Festival Hall, Southbank Centre, Belvedere Rd, Lambeth, London SE1 8XX
➡️ southbankcentre.co.uk

Fabulous things to do in London this September

One of the most important events happening in London this summer is the first official London Trans+ Intersex Pride! This completely grassroots DIY event will focus on creating a space for London’s trans, non-binary, intersex and gender nonconforming community and feature talks, discussions and performances. More info should become available closer to the date so make sure you check out their event page below.

Harry Potter and the Philosopher’s Stone in Concert

Potter fans – this one is for you. Imagine watching the original film on a 40-foot high screen, accompanied by a live orchestra? This is now an actual thing you can experience, as your favourite wizarding world will be appearing at the Royal Festival Hall with the Czech National Symphony Orchestra performing all the music.

Check back here for an update in early August!

Fabulous exhibitions in London this summer

Fabulous theatre and live performance in London this summer

Fabulous musicals in London this summer

Pin this guide for later! 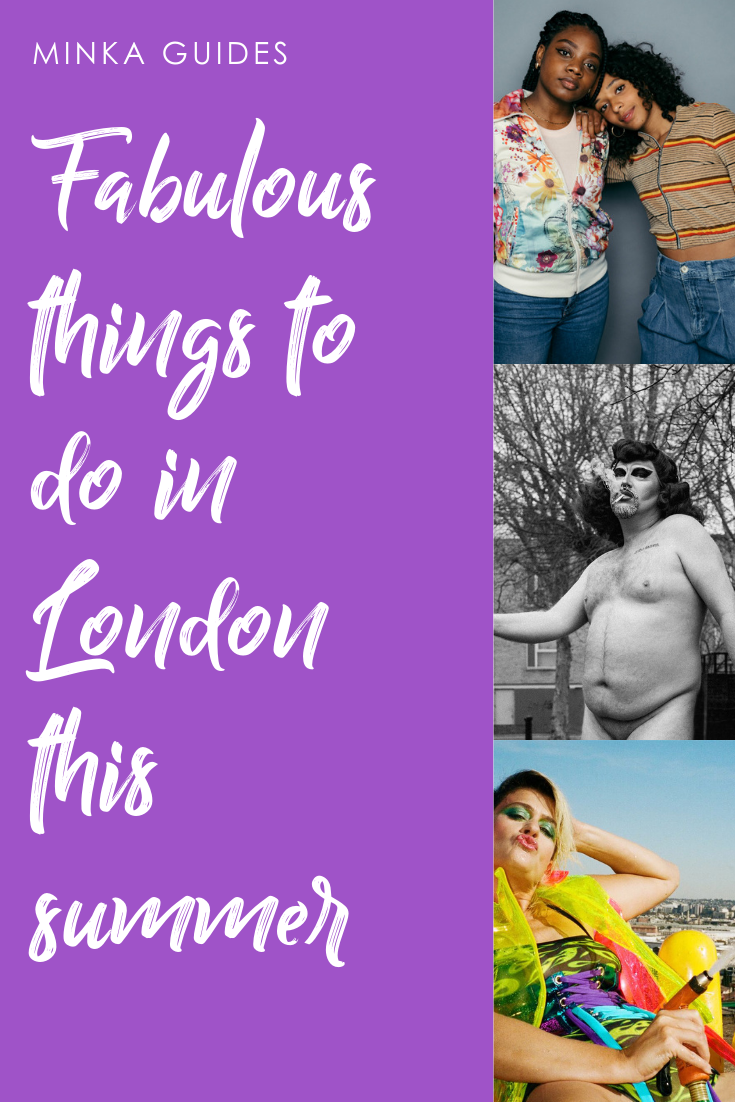 Today is a weird milestone: it's my last period of

Is there anything more dystopian than a Covid test

How to be fabulous when spending Christmas alone
This site uses cookies: Find out more.