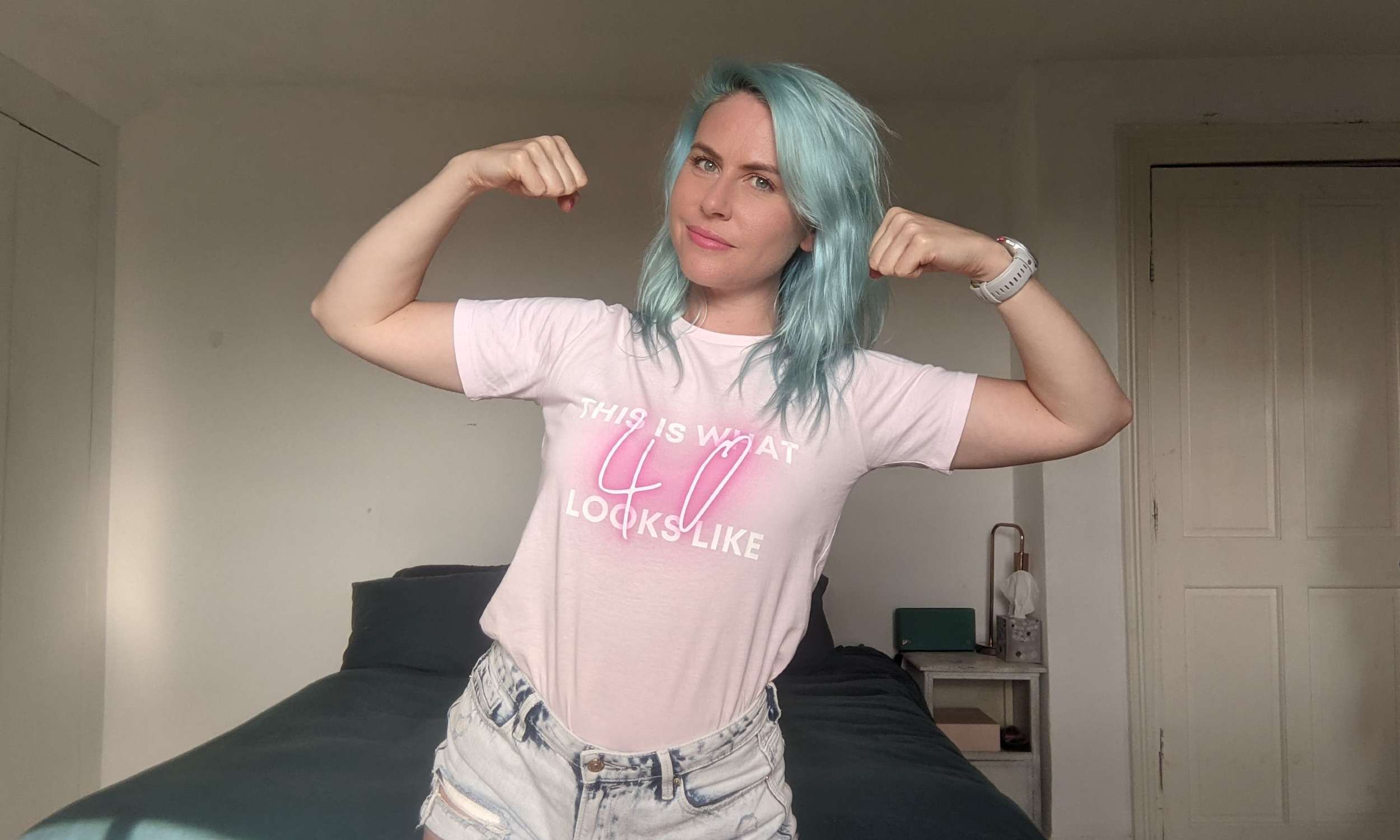 What does 40 look like? When I reached this milestone earlier this year, I began to receive lots of compliments about my age. People were sliding into my DMs, gifting me with the information that I ‘didn’t look 40’. Friends asking me what my ‘secret’ was. Supermarket workers doing double-takes when they tried to card me (like any 17-year-old would be buying the ingredients for espresso martinis, along with a jar of capers and some kettle descaler).

At first, this felt amazing. Here I was, fresh into a new decade of my life, and I was already smashing it… well, when it came to ‘youthful’ looks, at least. Then, I slowly started to realise that most people don’t actually see me. What they see is my colourful hair and clothes, plus the absence of a screaming toddler, and make hasty mental calculations from there.

As the months rolled by, I started to feel invisible in my new age. Like I had somehow fallen through the cracks of life and wasn’t exactly smashing it but instead was maybe… failing at it? If both my appearance and my life don’t appear to belong to a 40-year-old woman (2022 UPDATE: I no longer identify as a woman but as genderqueer), then being told I don’t look my age suddenly feels less of a compliment and more like an evaluation.

I considered pointing out things to indicate that I am, in fact, my age. Like yes, I have blue hair and I’m perimenopausal. Or no, I don’t have children but I am about to get divorced for the second time. Instead, I made myself this t-shirt so that I can own my age very publicly. I realised when it arrived that by making it baby pink (and a large child’s size), I had unconsciously infantilised something that was supposed to indicate that I’m a grown-ass woman. Oh well.

I suppose herein lies my eternal conundrum about ageing: what is it supposed to look like? I want to write a superb feminist essay about how we need to rethink our obsession with ageing. However, considering I use no less than eight different moisturising creams and serums each day and digitally enhance most photos before they go online, I feel like I’ll probably be first against the wall come that revolution.

So, instead, let’s reconsider how each decade of our lives should look. Not just physically but spiritually, mentally and emotionally. Because I’ll let you in on a secret: all those people in their forties, fifties and sixties – they aren’t old.

Some other editors at Ms. magazine were throwing me an omelet party at some restaurant in the neighborhood for my 40th birthday. And a reporter said to me, kindly, “Oh, you don’t look 40.” And I said, just off the top of my head, “This is what 40 looks like – we’ve been lying for so long, who would know?

The idea of having an omelette party aside, Steinem’s quote is pretty iconic. What does 40 look like? This is what 40 looks like. What you perceive this age to be is wrong if it doesn’t include me. It’s a correction, an invitation to look again with a new understanding.

What’s also important about this quote is that Steinem owned her age in an era where women were told to hide theirs – especially once they reached their thirties and forties. She was pointing out that this misunderstanding was based on the lack of social context for how a 40-year-old woman looked. Especially one who, in 1974, wasn’t married, didn’t have children and lived in the public eye.

I think it’s essential for women to own their age for precisely this reason. We inform a broader understanding that there is no one way to look, live, or exist at any particular age. In making this statement, Steinem wasn’t creating a standard that everyone at 40 should look like her, but that any understanding of this age should have space for all of us.

Of course, when we talk about ageing, what we are actually talking about is beauty. Not a concept of beauty that is subjective, fluid and free but a powerful systemic construct. One that is used to judge women, to trivialise us, to give us currency and then take that power away. One that requires us to look a certain way for our age and even our gender identity to be taken seriously. One that attempts to shut out men and some non-binary people who want to take part in it. One that is deeply entrenched in racism, sexism, transphobia, class and, of course, ageism.

So, considering all of this, it’s easy for a slender white cis woman who can afford to buy herself moderately expensive skincare products (albeit on a substantial discount via eBay) to be on the internet exclaiming, “Oh my god, people tell me that I don’t look my age and I’m so over it!” That isn’t what this is about, though. I don’t want to pass as a younger age. I want you to see me for the age I am. I want my version of 40, the way I present myself and my chosen life, to be valid.

There is so much power in being a middle-aged woman. I am so goddamn happy to be here, and I want younger people to realise that their life can look like whatever they want it to when they reach this age (and beyond). So, when I quote Steinman and say, “this is what 40 looks like”, I am challenging you to change not only the way you see me but the way you see yourself and your life as well.

Recently, my wonderful brother Iain shared a meme reminding me that when Kylie Minogue brought out her video for Spinning Around, the press called her “brave” for wearing tiny gold hotpants “at her age”. Shockingly, back in 2000, Kylie was the ripe old age of 32.

Flash forward 21 years, and I feel pretty comfortable doing pretty much anything I like while Angela Bassett is out there rocking catsuits in her sixties and Jennifer Lopez keeps on doing exactly what J-Lo does best in her fifties. As for Kylie, well, I am still here for everything she does too. (Disco was one of my favourite albums of last year, for the record).

How to be fabulous when spending Christmas alone

Ageing is changing. The way our parents are navigating through middle age and later life looks very different to their parents. And our lives? They will be even more unlike those of our grandparents. Not only are we as a population living later, but developments in medication, diet, skincare and fitness are transforming not just the way we look but the way we live. We may not be able to buy a house before retirement (if we even stop working), but boy, do we look good.

The stigma associated with ageing is slowly beginning to change with these developments too. At this time in my life, I’ve chosen not to be married, to have kids, a mortgage or be on any career ladder. So, my life doesn’t look that different from someone in their mid-twenties right now. It may still look like this in another decade, too (depending on whether I’ve managed to backpack around the world by then).

None of this is surprising to people in their middle age. They’re out there living their lives and feeling their way through this slowly transforming landscape of modern life. Where we need the perception shift to happen as a society is in the way we pressure people in their twenties and thirties to get their lives ‘in place’.

I’m watching my friends in their late twenties start to go through the same crisis I went through at that age. There is this pervasive messaging that our lives need to be ‘sorted’ by our early thirties, with the perfect relationship, career, home and the option of children, if that’s what you want. So, we rush to put all those pieces (even if they aren’t suitable for us) in place because we fear crossing the threshold of 40 without them.

The reality is: you have time. So much goddamn tiiiiiime. Aside from the very real limitations of fertility (should you wish to have children that way), you don’t need to have anything else worked out. Your forties, fifties and sixties are there for you to keep exploring, growing, and discovering. You don’t need to ‘lock anything down’ for the rest of your life before then simply because your life has barely even started yet.

I honestly feel if we could shift this pressure in our younger years, then we could create a real sense of adventure in middle age. That it becomes something we look forward to rather than fear. That we can look to people older than us and tell them that they make their age look so exciting/interesting/beautiful/powerful. In fact, say that the next time you go to tell someone that they don’t look their age. You make 40 look exciting sounds like a real compliment to me.